I had been studying the link between museums, empathy and emotions from a sociological perspective for the past 6 months when last January I received the NEMO Newsletter advertising the conference Connected Audience – Emotions in Berlin in April 2019. Perfect timing, sort of closing a circle of months long reflections. Now that I am back from the conference, I have a few thoughts on my mind regarding the event and some valuable inputs to process. Since I learned it to be better, I will start with the bad things and then go on with the positive fact so the latter stick to memory for longer time.

The most relevant aspect for me, as a researcher from Spain, was the complete absence of non North-American & European (mostly western) perspectives. No more than 10 attendees out of over 300 came from Southern Europe and only one speaker came from Russia, which is possibly not yet Europe entirely.

Indeed museum studies are absolutely not something in Italy, for example. But they are in Spain and there was only one other colleague from Spain and one from Portugal. Very sad. Reasons for that? Costs? Language? That might even be true for participants but not for speakers*. Where were they? A conference about emotions in museum which does not include experiences of conflictive events and XXI historical narratives? That was by far the biggest disappointment: in the whole conference there was only a person coming from India and one from Hong Kong. How can a discussion about audience and emotions lack inclusiveness and diversity at its core?

Beside that I acknowledge that overall and everywhere my perspective is annoyingly academic, and therefore focusses always on aspects of work and planning. In general, I focus on data and methodologies (or lack of) of projects, and every time I remain surprised by how knowledgeable some professionals are but how all of a sudden money, grants and big projects take over and nobody in the end cares about the original projects and objectives or will ever state it transparently.

These aspects left me with a bitter note of disappointment about the environment I was in, but I will expand on the positive parts soon, because of course there have been too.

Picture: Tiergarten from inside the Kulturforum and “Ist das Kunst?”, the museums mock the famous pop saying (especially in Berlin) “is this art or can I throw it?” to put itself back on the map using material cultural studies.

*In fact, a German speaker read through her written English text with no intonation in her voice and interrupted her sentences in the middle with no sense of grammar because she had too little confidence in English (something the moderator said, and all questions to her and her own answers were actually translated to German) and therefore made our following of her speech veery challenging. This makes me think also that the organization could have thought of interpreters. 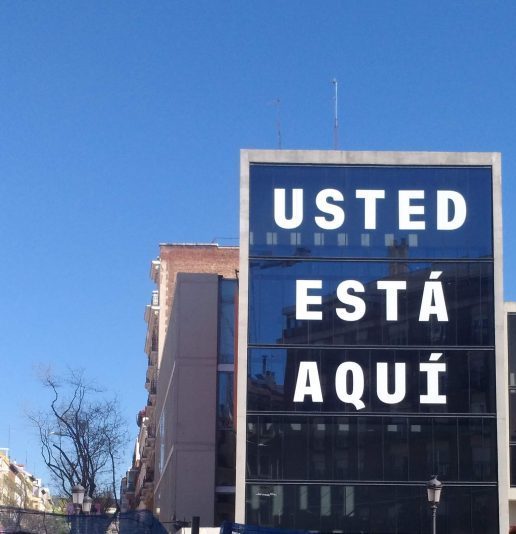 A couple of weeks ago I escaped Valencia while the city was being taken over by the local celebrations of Fallas.

While living in Spain about ten years ago, I thought very little of Fallas. Literally. I did not give too much thought to them and I only considered it a loud event to which bright Erasmus students would go to get drunk before going back home to become lobbysts or political VIPs in different countries handling the most crucial matters of our age. No need to get on any bus or train to see it. What I completely misunderstood and never bothered to even try to grasp or feel or understand was the massive support they enjoyed and how deeply rooted that was.

Then 2018 arrived and Fallas came along. I did not know the celebrations would last for weeks and they would overturn the daily life of the city. Little food trucks (the real ones) frying churros, buñuelos and any sort of edible thing from 8 am til 2 am at every corner, all sort of firecrackers at every hour of the day and the night, hoards of people ignoring basic traffic rules, let alone hygiene ones.

And the Parade for the “Flower Ofrenda“: every Fallero and Fallera of the city parades and brings flowers to a statue of the Virgin Mary on the main square. I remember coming back home from work with my bike and facing thousands of people of all ages dressed in expensive and uncomfortable traditional clothes parading through the center, and just stood there speechless. It might have been the first time I experienced a nationalistic folkloric event of these proportions. As an Italian raised in a very laic environment, I am really unprepared for this sort of events, and, I realize, I lack tools of understanding, and empathizing, I think.

With this on my mind, I went away for the weekend, and hopped on a train to the capital to visit friends. Friends have friends, and the latter ones might turn out to be curious and nice persons and all of a sudden it’s 4 am and you are talking nationalistic sentiments in Spain before the elections. It turned out the Fallas had a certain allure to them, actually quite a lot. The festivity as a shared moment through which people connect prevailed over any other nationalistic aspects, in their minds. Even though they had not lived in Valencia nor had they ever been in the city over fallas they envied it. They were longing for the common feeling of belonging to a strongly characterised place, longing for the collective identification process embodied by the attires, the objects, the shared spaces of the city being transformed in its design and traffic, and even in its possible generally accepted normative role.

To me it felt naive, almost childish at times, and it made me acknowledge once again how powerful nationalism as sentiment related to an administratively regulated area is among us, including left wing politically committed adults. It scares me but remains mesmerizing, this building of collective feelings.